American officials led by President Biden are responsible for the “Nazification” of Ukraine, one of Russia’s top lawmakers says, and should be tried before a court. In fact, another lawmaker says, it is time to create a “modern analogy to the Nuremberg Tribunal” as Russia prepares to “denazify” Ukraine.

In case the message was not clear, the Kremlin’s marquee weekly news show aired black-and-white footage on Sunday of German Nazis being hanged on what is now central Kyiv’s Independence Square. The men drop, dangling from a long beam, and the crowd cheers. 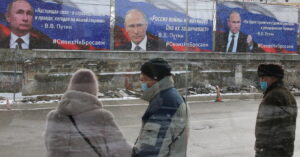 The language of Russia’s invasion of Ukraine has been dominated by the word “Nazi” — a puzzling assertion about a country whose president, Volodymyr Zelensky, is Jewish and who last fall signed a law combating anti-Semitism. Mr. Putin only began to apply the word regularly to the country’s present-day government in recent months, though he has long referred to Ukraine’s pro-Western revolution of 2014 as a fascist coup.

The “Nazi” slur’s sudden emergence shows how Mr. Putin is trying to use stereotypes, distorted reality and his country’s lingering World War II trauma to justify his invasion of Ukraine. The Kremlin is casting the war as a continuation of Russia’s fight against evil in what is known in the country as the Great Patriotic War, apparently counting on lingering Russian pride in the victory over Nazi Germany to carry over into support for Mr. Putin’s attack.

“This rhetoric is factually wrong, morally repugnant and deeply offensive,” scholars of genocide and Nazism from around the world said in an open letter after Mr. Putin invaded. While Ukraine has far-right groups, they said, “none of this justifies the Russian aggression and the gross mischaracterization of Ukraine.”

Ukrainians say that the horrors of Russia’s invasion show that if any country needs to be denazified, it is Russia. Its war has brought devastation to Russian-speaking cities like Kharkiv and Mariupol and widespread suffering to Kyiv.

And Mr. Putin, in a speech on Wednesday, used the us-versus-them language of a dictator to proclaim that Russian society needed a “self-purification” from the pro-Western “scum and traitors” in its midst.

Many believe that Mr. Putin’s stated determination to “denazify” Ukraine is code for his aim to topple the government and repress pro-Western activists and groups. It is an echo of how he has used Russian remembrance of the nation’s suffering and victory in World War II to militarize Russian society and justify domestic crackdowns and foreign aggression.

Ukrainians have closed ranks behind Mr. Zelensky, however, causing Mr. Putin to escalate the brutality of his war. Mr. Putin’s “denazification” mission increasingly means that he is determined to “destroy all Ukrainians,” the country’s information minister, Oleksandr Tkachenko, wrote on Facebook, in Russian, last week.

“This is worse than Nazism,” Mr. Tkachenko wrote.

It may seem hard to fathom that regular Russians could accept Mr. Putin’s comparison of neighboring Ukraine — where millions of Russians have relatives and friends — to Nazi Germany, the country that invaded the Soviet Union at the cost of some 27 million Soviet lives.

Like many lies, Mr. Putin’s claim about a Nazi-controlled Ukraine has a hall-of-mirrors connection to reality. Jewish groups and others have, in fact, criticized Ukraine since its pro-Western revolution in 2014 for allowing Ukrainian independence fighters who at one point sided with Nazi Germany to be venerated as national heroes.

Some fringe nationalist groups, who have no representation in Parliament, use racist rhetoric and symbolism associated with Nazi Germany.

Eduard Dolinsky, director general of the Ukrainian Jewish Committee, a group representing Ukrainian Jews, said that some in the country do derisively refer to those far-right groups as “Naziki” — “little Nazis” — as Mr. Putin does. On social media, Mr. Dolinsky in recent years has frequently called attention to things like the renaming of a major stadium in western Ukraine for Roman Shukhevych, a Ukrainian nationalist leader. He commanded troops that were implicated in mass killings of Jews and Poles during World War II.

“This problem did exist and continues to,” Mr. Dolinsky said in a phone interview from western Ukraine, a few days after fleeing Kyiv. “But it has of course receded 10 times in importance compared to the threat posed by Russia in its alleged fight against Nazism.”

Mr. Dolinsky’s posts about far-right issues in Ukraine were often amplified by Russian officials, who used them as evidence that the country was dominated by Nazis. Some Ukrainians criticized him for playing into Russian propaganda, but Mr. Dolinsky says he has no regrets — and notes he has steadfastly refused invitations to appear on Russian state television.

Sergei Markov, a pro-Kremlin analyst who appears frequently on state television, claims that Ukraine’s modern-day Nazis are not anti-Jewish but anti-Russian — because that is the agenda that he claims Western intelligence agencies set for them. In Russia’s increasingly convoluted propaganda narrative, reprised by Mr. Putin in his speech Wednesday, the West is backing Ukraine’s “Nazis” as a way to degrade Ukraine’s Russian heritage and use the country as a platform to destroy Russia.

An attack in the west. A missile strike rattled the outskirts of Lviv, a western city that has been a haven for people fleeing areas under siege. The mayor of the city said several missiles had struck an aircraft repair plant at the airport in Lviv, destroying the buildings.

A looming energy crisis. The International Energy Agency said that the repercussions of Russia’s invasion of Ukraine are likely to intensify over the next several months, and nations around the world should respond by reducing their use of oil and gas.

“We are being convinced again and again that the Kyiv regime, for which its Western masters have set the task of creating an aggressive ‘anti-Russia,’ is indifferent to the fate of the people of Ukraine themselves,” Mr. Putin said.

Mr. Markov says the Kremlin started using the “Nazi” terminology to “get through to Western politicians and media” about the necessity of invading Ukraine. But the use of the word also appears geared toward Russians, for whom remembrance of the Soviet Union’s victory over Nazi Germany remains perhaps the single most powerful element of a unifying national identity.

“From the point of view of Russian society, today’s Ukrainian fascists are successors to the cause of the fascism of that time,” Mr. Markov said, echoing a Kremlin talking point.

Even as state television ignores the devastation that Russian forces are causing in Ukraine, and the mounting tally of Russian casualties, it is filled with reports about Ukrainian extremist groups — ones that in reality occupy a marginal place in Ukrainian society. Reports about streets being renamed for Stepan Bandera, the Ukrainian nationalist leader who at one point sided with Nazi Germany against the Soviets — before the Germans turned against him and put him in a concentration camp — offend older generations of Russians who heard about the evils of Nazi collaborators.

With Ukrainian nationalist groups now playing an important role in defending their country from the Russian invasion, Western supporters of Ukraine have struggled for the right tone. Facebook last week said it was making an exception to its anti-extremism policies to allow praise for Ukraine’s far-right Azov Battalion military unit, “strictly in the context of defending Ukraine, or in their role as part of the Ukraine National Guard.”

Russia’s state media seized upon Facebook’s move as the latest proof that the West supported Nazis in Ukraine. They also highlight it when Western politicians, like House Speaker Nancy Pelosi on Wednesday, greet Mr. Zelensky with “Slava Ukraini!” — “Glory to Ukraine!” — a greeting used by Bandera’s troops.

“For people socialized in this Soviet culture, these are definitely negative associations,” said Vladimir Malakhov, a historian at the Moscow School of Social and Economic Sciences who studies nationalism and ethnicity. “It’s anti-Semitism, it’s being anti-Russian, it’s radicalism.”

Mr. Dolinsky, of the Ukrainian Jewish Committee, noted that there have been many Jews among the 3 million Ukrainians who have fled the country, and that some may not return. Mr. Putin’s war may thus deal a devastating blow to Ukraine’s Jewish community, he said.

“This will be among the results of this ‘denazification,’” Mr. Dolinsky said. “Our lives have been destroyed.”