Officials are conducting autopsies to learn more about the circumstances surrounding the deaths of three Americans at a Sandals resort on the Bahamas’ Great Exuma island Friday, according to the Bahamian police commissioner.

The pathologist “consented to doing the autopsies” Monday, Bahamas Police Commissioner Paul Rolle said, and further information would be provided when available.
The autopsy exams could help answer questions about how the three Americans — two from Tennessee and one from Florida — died over the course of one evening. A fourth American, the wife of the Floridian who died, is in good condition after she was aiirlifted to the nation’s capital of Nassau for further treatment before being transferred stateside.
No signs of trauma were found on the bodies, the Royal Bahamas Police Force said in a statement to CNN, and the circumstances remain under police investigation.
Here’s what we have learned so far:

How did the situation unfold?

According to the police statement, authorities at the George Town Police Station received a call shortly after 9 a.m. Friday from staff that an unresponsive male was found in one of the resort’s villas.

While enroute to the scene, police were told an additional male and female, both unresponsive, were found in another villa on the property. 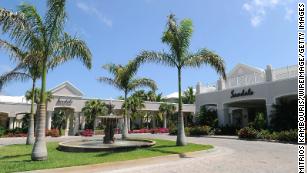 Police found in the first villa a “Caucasian male lying on the ground unresponsive” with no signs of trauma. A doctor pronounced him dead, police said. The woman who was hospitalized was found with him, Rolle said Saturday.
At the second villa, they found a man “slumped against a wall in a bathroom unresponsive,” and the woman was “found in a bedroom on a bed,” the police statement said.
“Both showed signs of convulsion,” the release said,
and neither showed signs of trauma.
“The night prior, all of them had reported feeling ill,” Rolle said, and “were seen by the medics.” They were treated at different times and had eaten prior at different locations, he
said.

When asked at a news conference how long the guests may have been dead before they were discovered, Rolle said, “They were seen by the doctor the night before, and that would have been around 11, and they were discovered the next morning. So, we have the timeline … between 11 p.m. and 8:30 to 9 a.m.”

Who are the victims?

Husband Michael Phillips, 68, and wife Robbie Phillips, 65, were identified by authorities as the couple from Tennessee who died at the resort.

Vincent Paul Chiarella, 64, from Florida, was the third individual found deceased.
His wife, Donnis, 65, has since been transferred from Nassau to Miami’s Kendall Hospital and is ingood condition, according to Jennifer Guerrieri, a spokesperson for Hospital Corporation of America’s east Florida division.

Their son, Austin Chiarella, told ABC News his mother “woke up and my dad was laying there on the floor, and she couldn’t move. Her legs and arms was swollen and she couldn’t move and she screamed to get someone to come in the door.”
Donnis Chiarella told her son she became ill Thursday but after she was released from a clinic, she “thought she was alright,” according to ABC.
He said he was heartbroken over his father’s death. “My dad was everything to me,” he told ABC.
CNN’s efforts to reach Austin Chiarella have been unsuccessful.
The Phillips’ daughter, Caroline Phillips Fortenberry, sent CNN a statement Monday.
“Our hearts are grieving and broken but full of hope,” she wrote. “We know our mom and dad are experiencing fullness of joy in our heavenly Father’s presence. We already miss them terribly. Our parents left a legacy of faith in Jesus and generously loved their family and friends.”
Authorities are working on plans to repatriate the bodies of the deceased, and arrangements have been made to hand over their belongings to their representatives in the US, Rolle said.

Where does the investigation stand?

Foul play is not suspected in Friday’s deaths, Bahamian acting Prime Minister Chester Cooper has said.
Rolle declined to answer specific questions from reporters Monday about whether authorities are pursing specific leads, only saying several samples have been collected from the premises and their forensic examination should help determine if any chemicals were present.
A lab in Philadelphia assisting with toxicological examinations in conjunction with Bahamian pathologists and results could be available within seven days, according to Rolle.
The Department of Environmental Health Services was still on scene at the resort Monday, Rolle said.
The US State Department said in a news release, “We are closely monitoring local authorities’ investigation into the cause of death. We stand ready to provide all appropriate consular assistance.”
Sandals Resorts said in a statement to CNN Saturday, “Nothing is more important to Sandals Resorts than the safety of our guests,” and expressed “deep sadness” confirming the deaths.
The resort was working to “support both the investigation as well as the guests’ families in every way possible,” but could not disclose further information “out of respect for the privacy of our guests,” according to the statement.