The list of companies continuing to operate in Russia is shrinking by the minute, but dozens of corporations including multinational manufacturers and hotel chains are still doing business in the country despite intense public pressure to withdraw over its invasion of Ukraine.

McDonald’s was among the big-name companies to announce last week that it would temporarily close its 850 restaurants in Russia. Cola-Cola and PepsiCo quickly followed suit, as did restaurant chains Burger King, Papa John’s, Little Caesars and others. Deutsche Bank on March 11 announced that it was “winding down” its business in Russia. The German financial giant had drawn fire for initially saying that it intended to continue some of its activities in the country.

The decisions to withdraw or suspend operations come amid warnings by Russian prosecutors that existing companies could see their assets seized and CEOs critical of the government could face arrest, the Wall Street Journal reported, citing people familiar with the matter.

Caterpillar cited “supply chain disruptions and sanctions” for its March 9 decision to suspend operations at its Russian manufacturing facilities. “We recognize this is a time of incredible uncertainty for our valued employees, and we will continue to look for ways to support them,” the maker of construction and mining equipment stated.

The Peoria, Illinois-based company opened its first office in Russia in 1973, and has a parts distribution facility in Moscow and a manufacturing plant in Tosno, near Saint Petersburg. Russia accounts for 8% of Caterpillar’s annual revenue, or approximately $4 billion, according to Yale University management professor Jeffrey Sonnenfeld.

More than 30 large companies “remain in Russia with significant exposure,” according to a running tally updated daily by Sonnenfeld and his team.

The goal of calling out the companies is to pressure them to work in concert with the U.S. government and its allies that have imposed economic sanctions against Russia, Sonnenfeld told CBS News. Government sanctions “rarely succeed completely alone — they need fairly universal support of the business community to truly paralyze an economy as intended,” he said.

For example, starting in the 1980s the combination of economic sanctions and a widespread corporate pullout from South Africa, led by General Motors, helped undermine the country’s apartheid system of institutionalized racial segregation, Sonnenfeld said. He also said he’s been hearing from CEOs frustrated with boards “caught in a 1990s mind warp, where we thought, ‘Well, we’re going to have to find a middle ground here.'”

“There’s no middle ground here,” the professor said of Russia’s war in Ukraine.

Companies voicing “humanitarian concerns for the general Russian citizenry” are missing the point of the sanctions, which only succeed when the “tyrant is no longer a successful totalitarian,” Sonnenfeld added. 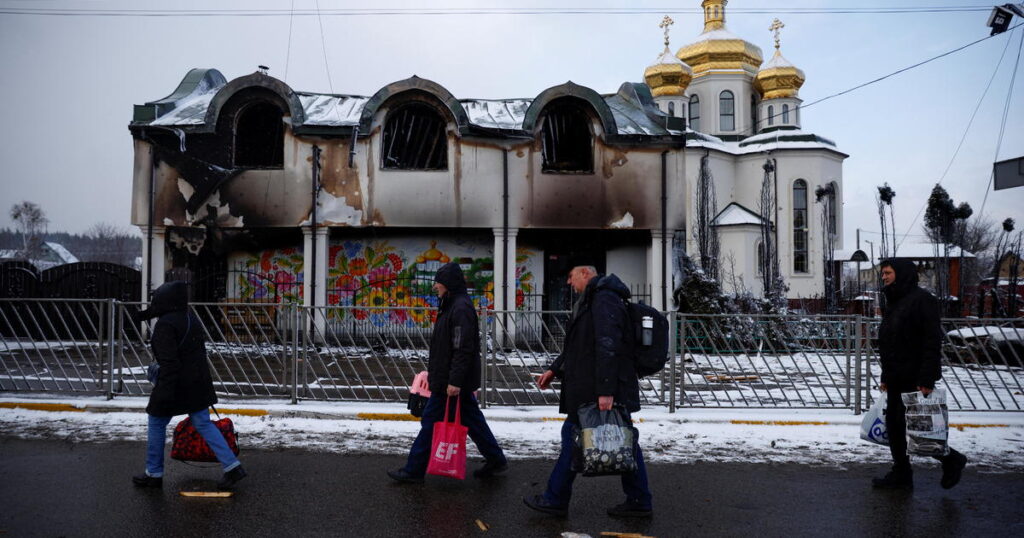 Large businesses choosing to maintain their presence in Russia include Illinois-based Abbott Labs. Among companies condemning the war, Abbott on March 4 said it would donate $2 million to humanitarian groups offering relief in Ukraine. The multinational medical devices and health care company did not mention Russia or its operations in the country in its statement.

Direct sales giant Amway employs at least 500 people in Russia, which generates about $200 million in income for the company that follows a multi-level marketing business model. Ada, Michigan-based Amway said it was “saddened by the war and devastation in Ukraine” in a statement posted on March 4.

There are 21 franchised-owned and operated Dunkin Donuts in Russia, where the Canton, Massachusetts-based coffee-and-sweets brand returned in 2010 after an 11-year absence. The company told Yahoo Finance on March 11 that it had halted all “current development and investment” in Russia, while noting it can’t legally close the independently operated franchises.

Also on Sonnenfeld’s list is Tokyo-based tire and rubber-products producer Bridgestone Tire. It runs manufacturing plants in Russia, but the extent of its business in the country is unclear.

Cargill is scaling back business activities and has stopped investment in Russia, the U.S. agricultural giant said on March 11, but is continuing to offer what it called “essential food and feed facilities” there. “This region plays a significant role in our global food system and is a critical source for key ingredients in basic staples like bread, infant formula and cereal,” the company said.

Cargill derives $1.1 billion of revenue from Russia, where it has 2,500 employees, according to Sonnenfeld. Cargill described the $1.1 billion figure as inaccurate, but a spokesperson said in an email the company does not disclose financial information at a country level.

Citigroup is expanding on its previously announced exit of its consumer banking business in Russia “to include other lines of business and continue to reduce our remaining operations and exposure,” the New York-banking giant stated on March 14. “Due to the nature of banking and financial services operations, this decision will take time to execute.” Citi said it would no longer solicit new business or clients as it provides assistance to multinational corporations unwinding their business in Russia.

Citi holds $9.8 billion in domestic and cross-border exposure to Russia, according to a regulatory filing on February 28. That’s a much larger stake than Wall Street rivals like Goldman Sachs and JPMorgan Chase, which both announced their pullouts from Russia on March 10.

General Mills — the Minneapolis-based maker of Cheerios and other packaged food— has a joint venture with Nestle called Cereal Partners Worldwide, or CPW, that operates in Russia. CPW generated $118 million in sales for General Mills last year, less than 1% of the company’s total sales, which came to $18.1 billion in 2021.

CPW has suspended capital investment in Russia, and “we will continue to be in close communication with Nestle as the situation unfolds,” a General Mills spokesperson emailed on March 10.

Nestle on March 9 said it had suspended capital investment and advertising in Russia, but would continue to sell “essential” food products in that country. “As a food company and employer, we also have a responsibility towards the people in Russia and our more than 7,000 employees — most of whom are locals,” the world’s largest food company said in a statement.

Oilfield services firm Halliburton gets as much as 2% of its revenue from Russia, according to a J.P. Morgan estimate cited by Bloomberg News. The company reported $15.3 billion in total revenue for 2021.

Multilevel marketing company Herbalife Nutrition gets 2.7% of its revenue from Russia and Ukraine.

Hotel chain Hyatt on March 9 said it was suspending development activities and new investments in Russia and will “continue to evaluate hotel operations in Russia.” Hyatt in a March 4 statement said it was “heartbroken over the devastation” in Ukraine and had started a relief fund for colleagues in the region in need of necessities and relocation help. Hyatt still operates six locations in Russia, according to Sonnenfeld.

Koch Industries has numerous ongoing business operations in Russia, and has not given any indication of that changing, Popular Information reported on Monday. Its wholly-owned subsidiary, Guardian Industries, operates two glass production plans in Russia, one near the border with Ukraine, according to the newsletter run by Judd Legum.

Koch Industries has two other subsidiaries with operations in Russia, including Molex, an electronic components maker, according to Popular Information. Koch-Glitsch operates as Koch Engineered Solutions, which maintains a sales office in Moscow.

Echoing that stance, rival hotel operator Marriott on March 8 updated its statement expressing concern over the humanitarian crisis in Ukraine and neighboring countries, saying it’s working with charitable organizations to help. The international chain has at least 10 locations in Russia.

Chicago-based global advertising agency Leo Burnett has an office in Moscow, and its Russian clients include Russian digital-services provider Rostelcom.

Fast-food giant Subway said it would redirect any profits from its Russian operations to humanitarian efforts, noting that roughly 450 outlets in Russia are independently owned and controlled by local franchisees.

Still, being among the listed outliers is prompting calls on social media to boycott Subway and others on it.

“The Russian invasion of Ukraine has highlighted the intersection of risk, reputation and revenue,” Paul Washington, executive director of the ESG Center at the Conference Board, said in a report. “For many companies, the decision to suspend ties may be a relatively easy one. Given the size of the Russian economy, little revenue may be involved. And the reputational harm of continuing business — and the benefit of announcing a withdrawal — may be significant.”

Kraken CEO Jesse Power replied, saying that “despite his deep respect for the Ukrainian people,” his company would not freeze the accounts of Russian clients unless it was legally required to do so.

The world’s biggest cryptocurrency exchange, Binance, is blocking the accounts of Russians on western economic sanction lists, but not Russians at large. “We are not going to unilaterally freeze millions of innocent users’ accounts,” CEO Changpeng Zhao wrote in a March 4 blog post.

Coinbase CEO Brain Armstrong on March 4 tweeted that “ordinary Russians are using crypto as a lifeline.” Still, the company would comply with any bans imposed by the U.S. government, he added.

Coinbase’s stance aligns with those taken by other crypto exchanges including Kraken, KuCoin and Coinberry.