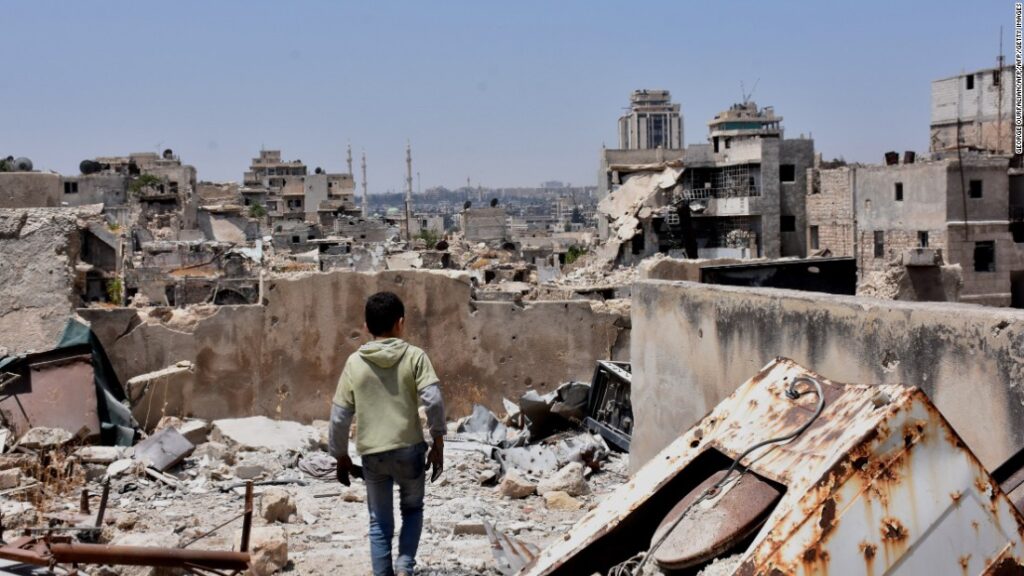 For English teacher Hamdo, watching Russia’s war on Ukraine has brought back memories of the darkest days of his life — the siege of his city, Aleppo, in 2016.

Russia invaded Ukraine in late February.The war has caused hundreds of civilian deaths, including dozens of children, and forced more than three million people to flee the country.

With the help of Russia, President Bashar al-Assad’s regime and its allies turned eastern Aleppo into a kill box. Three-hundred thousand of its residents were besieged, cut off from food and bombed into submission in December, 2016. It was a tactic used throughout the war and across the country, including alleged chemical attacks, which it denied. Those who survived the shelling had to leave behind what was left of their homes.

“They destroyed us; they destroyed our psychology,” Hamdo said. He recalled going to a hospital days before he left the city only to find himself walking over bodies to get through to his friend.

“This is what will happen in Ukraine,” he said. “What’s going on in Ukraine is only the beginning.”

Some in Syria say their country was the canary in the coalmine that the world chose to ignore. It was a testing ground for Russia’s war machine and a preview of its ambitions closer to home.

Hamdo was among a group of Aleppo residents who chronicled their life under siege. They posted daily videos on social media, appealing for the international community to save them. They say their calls fell on deaf ears.

“What’s affecting me a lot is that the world is repeating the same mistake [in Ukraine],” an emotional Hamdo told CNN. He said it pains him that condemnation of Russia’s war in Ukraine was as if “it’s [Russia’s] first war or first killing.”

“I cannot even imagine why people were blinded for 10 years,” he said.

In 2013, the Obama administration said that the Assad regime crossed a “red line” by using chemical weapons on its own people. But Western states decided against military intervention.

Then, in 2015, the Russian military intervened to prop up a weakened Assad, turning the tide of war in his favor.Today, Russia maintains a presence in Syria and Assad has regained control of most of the country. Several Arab states have re-established diplomatic ties with his regime.

For Russia, the intervention had multiple advantages. It solidified its ally’s power, gave it a foothold in the region and invaluable military experience.

The Russian defense minister even boasted about using Syria as a testing ground for the military.

“We have tested over 320 [types of weapons], in fact, we have tested all the weapons, except for easy-to-understand versions [in Syria],” Defense Minister Sergey Shoigu was quoted by Russian state media as saying in August.

Ismail al-Abdullah, a member of the White Helmets volunteer rescue group, witnessed firsthand the impact of those weapons on civilians. He was among the last group of Aleppo residents forced out of the city in 2016, having witnessed the pummeling of Syria’s second city by airstrikes. “Aleppo was like doomsday,” he told CNN.

“I saw buildings collapsed on the heads of families and children,” he said. “In one of the incidents 34 people were killed under a collapsed building by the bombing.” Abdullah said that building was struck by a bunker buster bomb.

During its military intervention in Syria, Russia has unleashed an indiscriminate bombing campaign on population centers, having struck hospitals, markets and schools.

The United Nations’ Independent Commission for Inquiry on Syria has said regime forces and Russia have indiscriminately bombed densely populated areas, having targeted and killed civilians.

Warring parties in the country have enabled the violation of nearly every core human right and nearly every war crime, Commission Chair Paulo Sergio Pinheiro said in Geneva earlier this month. “We can only hope that world leaders are doing everything they can to avoid a similar fate for Ukraine.”

Many Syrians feel that the impunity with which Russia acted in Syria may have emboldened President Vladimir Putin to invade Ukraine.

“What happened in Syria is like a lesson for the world that if they did something in the first place to help the Syrian people to stop Russia, maybe this would not be happening,” Abdullah said. “Russia would have stopped in the first place in Syria and would not have the courage to invade Ukraine.”

The White Helmets, who knows Russia’s playbook all too well, expressed concern for the situation in Ukraine and has offered tips to Ukrainians.

“Don’t respond to any bombing scene until the sky is clear of war planes,” Abdullah said, warning Ukrainians about Russia’s “double tap” bombings.

He lost colleagues in several of those attacks, where warplanes drop bombs on an area then strike the same area again in a few minutes, often killing first responders and those injured from the first strike.

“Do not walk in open roads,” he added. “There will be snipers who will shoot you … they do not care if you are a civilian, a rescue worker or a paramedic.”

Members of Abdullah’s team gather at their station in Idlib, the last rebel stronghold in Syria. They are in a constant state of alert. The ceasefire Russia and Turkey brokered there in 2020 is fragile. In the second half of 2021, the UN documented at least 14 attacks by pro-government forces that killed children including those on their way to school.

At refugee camps nearby, where wave after wave of Syrians displaced by those Russian airstrikes are now pressed against the Turkish border. They watch the war in Europe closely. Many feel their fate is tied to that of Ukraine.

“I am following the news in Ukraine and wish that Ukraine will win the war, so Russia does not go further,” 48-year-old Umm Hussein said. “Here in Syria they killed, destroyed and displaced us, making us refugees. If Russia wins [in Ukraine], it will go further and attack us.”

Despite their fears, there is empathy in the camps for the suffering from a war in faraway Ukraine.

“We are very emotional and affected by the scenes from Ukraine. As we see children dying, we are crying for them. We feel [for] them as we lived the same suffering,” she said.

The Gulf Cooperation Council has offered to host talks between Yemen’s warring parties between March 29-April 7 in Riyadh, Secretary General Nayef al-Hajraf said on Thursday. But the Iran-backed Houthis said they would only attend talks in a “neutral” country — not in Saudi Arabia, which has been leading a coalition battling the Houthis since 2015.

Tunisia’s powerful UGTT labor union will not remain silent if authorities do not include it in a dialog over the country’s political and economic future, its deputy head warned on Thursday, rejecting proposed reforms.

Top Russian rap artist Oxxxymiron cancelled concerts in Russia to protest his country’s war on Ukraine. Instead, he held a charity concert in Turkey’s Istanbul in solidarity with the victims of that war. Watch Jomana Karadsheh’s report.

Far north in Egypt’s Sinai Peninsula, scientists are experimenting with plant species to create alternative medicine that can be used in wound healing.

Home to more than 300 species of medicinal plants, Egypt’s Sinai is a predominantly desert region between the Red Sea and the Mediterranean. It is home to the ancient site of St. Catherine and is popular among tourists searching for a taste of calm and authenticity.

Sinai’s St. Catherine reserve contains several “unique and endangered medicinal plant species which have been threatened by overharvesting, collection for use as fuel, and overgrazing,” according to the United Nations-recognized St. Catherine Medicinal Plants Association.

Hassan Azzazy, a professor at the American University in Cairo, is experimenting with three plant species from Sinai to create what he calls “NanoEbers” wound dressings made of natural materials that expedite the healing process.

The idea first emerged through a doctoral thesis submitted by his former student and project co-founder, Wissam Sarhan. The two chemists identified the plants in the Sinai with the help of the region’s Bedouin tribes, who for generations have relied on herbs and plants for different forms of treatment.

Plants have generally been used as medicine for more than 60,000 years, says the US Department of Agriculture. Sinai’s rich natural habitat is ripe for research.

“These are made from biodegradable nanofibers, medicinal plants collected from Sinai,” Azzazy told CNN from his university lab in Cairo.

Wounds are often treated with synthetic material to heal skin, yet studies have shown that wound healing can greatly benefit from medicinal plants, according to the US National Library of Medicine.

Azzazy and Sarhan prepare the nanofibers, collect them on a piece of dressing cloth and add antibacterial material extracted from medical plants.

Nanofibers are man-made materials made from a mix of synthetic and natural polymers. “NanoEbers” mainly relies on natural materials to build nanofibers, such as honey, bee venom and even parts of shrimp and crab.

Azzazy and Sarhan’s project is still in its prototype phase, awaiting approval by the ministry of health and funding for commercialization. Their wound dressings have not yet been tested on humans, as they require approval from health authorities.

100 years ago, Egypt unilaterally declared independence from the British protectorate and established an independent kingdom. While independence was limited, it was a landmark step in Egypt’s trajectory toward full independence in 1952.

Following mass protests led by revolutionary Saad Zaghloul in 1919, Egypt declared independence on February 28, 1922, and installed the first King of Egypt and Sudan on March 15, 1922.

While the British recognized Egypt as an independent state, they maintained exceptions through which colonial control was upheld. Scholars describe Egypt’s 1922 independence as limited yet important for the formation of the modern Egyptian state.

The British-backed monarchy reigned until the 1952 revolution, instigated by a military coup under Gamal Abdel Nasser and his group of Free Officers.