President Vladimir V. Putin on Wednesday referred to pro-Western Russians as “scum and traitors” who needed to be removed from society, describing the war in Ukraine as part of an existential clash with the United States and setting the stage for an ever fiercer crackdown at home and even more aggression abroad.

Claiming that the West was trying to “cancel Russia,” the Russian leader laced his speech with derision for the “political beau monde” in Europe and the United States, and for the “slave-like” Russians who supported it. It was a far more hard-line message than one delivered earlier in the day by Mr. Putin’s foreign minister, Sergey V. Lavrov, who said that Russia saw “a certain hope that a compromise can be reached” with Ukraine to end the war.

The clash in tone indicated that even as Mr. Putin was directing his officials to explore a negotiated end to a war in which Russia faced far heavier resistance than the Kremlin had anticipated, he was prepared to keep raising the stakes in his conflict with the West. 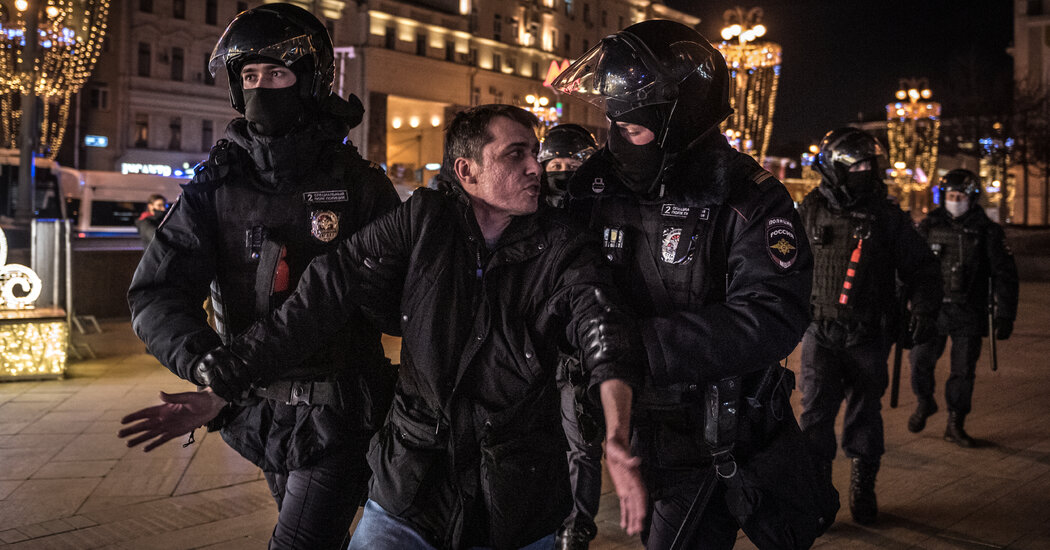 And in reserving his toughest language for fellow Russians who disagreed with him, Mr. Putin opened the door to a new wave of repression that, analysts fear, could hit a much broader swath of society than the activists and journalists the Kremlin has targeted in recent months.

“The Russian people will always be able to distinguish true patriots from scum and traitors and simply spit them out like a fly that accidentally flew into their mouths,” Mr. Putin said. “I am convinced that such a natural and necessary self-purification of society will only strengthen our country, our solidarity, cohesion and readiness to respond to any challenges.”

The beginnings of a new crackdown quickly emerged. The authorities announced a criminal case against a popular lifestyle blogger, Veronika Belotserkovskaya, for antiwar Instagram posts that “discredited the state authorities and the Armed Forces of the Russian Federation.” The government blocked access to the website of BBC News and promised that this was “only the beginning of the response to the information war unleashed by the West against Russia.”

“An unprecedented information campaign has been unleashed, which involves global social networks and all Western media, the objectivity and independence of which turned out to be just a myth,” Mr. Putin said. “The struggle we are waging is a struggle for our sovereignty, for the future of our country and our children.”

Tatiana Stanovaya, the founder of a political analysis firm, R. Politik, said Mr. Putin was signaling to law enforcement authorities across the country that they should target “all spheres of society that show any sympathy to the Western way of life.”

“This speech was, in part, an informal and indirect sanctioning of mass repression,” Ms. Stanovaya said. “His speech was scary — very scary.”

Mr. Putin insisted in his speech, which he delivered at the beginning of a televised videoconference with senior officials, that Russia’s military tactics in Ukraine had “fully justified themselves.” But even pro-Kremlin analysts said that Russia was becoming bogged down in a far bloodier conflict than anticipated — because Mr. Putin had apparently believed that many Ukrainian soldiers would lay down their arms rather than fight.

“The military operation is, no question, tougher going than had been expected,” said Sergei Markov, a pro-Kremlin commentator who appears frequently on state television. “It was expected that 30 to 50 percent of the Ukrainian Armed Forces would switch over to Russia’s side. No one is switching over.”

As a result, Mr. Putin appears to be probing for an exit that would fall short of his original aim of toppling the government of President Volodymyr Zelensky of Ukraine — even as his military continues to pound Ukrainian cities.

Russian and Ukrainian officials spoke by video link for a third straight day on Wednesday, and Mr. Putin’s lead negotiator said there had been “a certain progress on a number of positions, but not all of them.”

But Mr. Putin has made it clear that he sees Ukraine as only one battlefield in his wider conflict with the West — a fight, he reiterated on Wednesday, that he sees as existential.

Ms. Stanovaya said that Mr. Putin appeared to be leaving the unpleasant work of negotiating a compromise to end the war to his officials, while himself setting the stage for a bigger showdown ahead with the West and with pro-Western Russians.

“It’s dirty work to negotiate with Nazis,” she said, sarcastically alluding to Mr. Putin’s rhetoric about Ukraine’s leaders. “He’s got little to be happy about in this situation.”