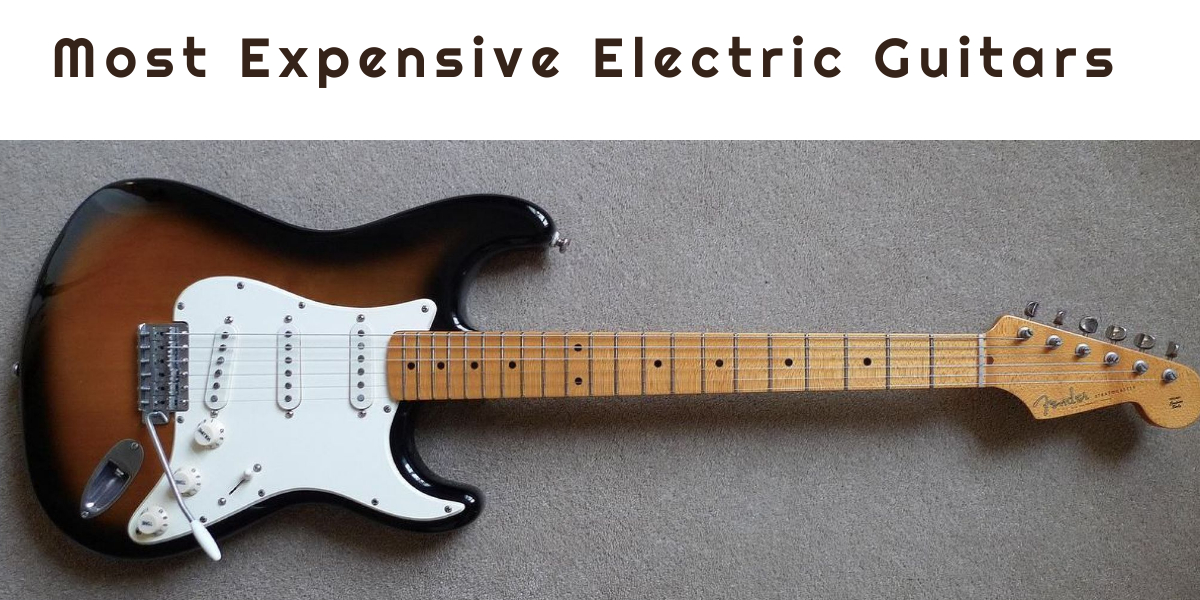 Top ten Most expensive guitars in the world

Music has been a person’s favorite part, it is 100% true that music helps to heal the problems and soothes your heart. And let’s face the fact that guitars play a very important role in the formation of good music. Moreover, guitars are a sign of coolness, and if you are really passionate about guitars then you are quite familiar with the most expensive guitars, available on the planet Earth. The extra special touches give the guitars their most expensive ratings. Guitars have been the most famous and popular musical instrument.

The net worth of the guitars depends upon the materials as well as the musicians who have played it during various shows and concerts.  The guitars are available in all types of shapes and sizes, what matters the most is the price. The difference in the price fluctuation depends upon the craftsmanship, the materials used, and the experts who were involved in making it. Guitars play a role involving vivid memories, the golden era of rock music till date remains as a legend because of the exclusive group of the guitarists. Today in this article, we will be talking about the most expensive guitars that have been sold, till date at the auction, and are easily not available in the local musician shops, by the end of this article you will get the idea of the most expensive guitars ever sold.

this guitar was the main component of the “Grateful Dead”, between the time periods of 1979-1989 this was the most popular and famous time period for the band. This guitar holds a lot of significance because this guitar was the companion of the band’s idol Jerry Garcia”, the time when he last played in public. This guitar has got an overall Aesthetic look which further gives a striking feature, of a tiger artwork done behind the concave bridge. This expensive guitar was sold back in 2002 with a whooping price of $957,000.

this guitar was made after combing the elements from three different guitars. And even this guitar holds an interesting story regarding its origin. Before creating Blackie, six guitars were bought by the fellow guitars who were Pete Townshend, George Harrison, and Steve Winwood. After that Clapton, created an idea in his mind to create up their own guitar, by adjoining together the best remaining parts of the guitars. After that “Blackie”, was created and was featured in many concerts and shows, it also elevated Clapton’s sound. But back in 1985 Clapton, took the decision to sell “Blackie” at an auction, so that he could raise funds for the crossroads, which is his recovery center. Blackie was sold at an auction for $959K, and it resulted to be an excellent fundraiser for Clapton.

1964 Fender Stratocaster: this guitar got famous because this guitar marked Bob Dylan’s transition towards electrical instruments. This guitar was played for the very first time by Bob Dylan during the Newport Folk Festival, and this was considered a blasphemous thing during those days. Bob Dylan’s use of this electric guitar was a shock for the folk musicians, because Dylan gave a new touch in the genre by using the electric guitar. Hence this guitar holds a very important place in the music industry, as it gave a new form in the music industry, it changed the status quo and it further expanded the horizons of the music genre. After 50 years of the Newport Folk Festival, this expensive guitar was sold at the auction for nearly $1 million USD dollars.

this expensive guitar first made its appearance back in 1959 during the performance of the Rolling Stones Very first performance on the Ed Sullivan Show. Since that time this guitar has been rocking on stage, and Richards is still rocking during the stage performance, at the age of 75, which gives him massive respect.  This guitar has got a history within itself. Les Paul was the close choice of Richard during the early days of the Stone’s.

But eventually, Richard decided to sell this guitar and he sold it to his fellow bandmate Mick Taylor. But it found its way back to Richard during the time when Mick Taylor succeeded Brain Jones as the second guitarist of the Stones. But back in 1971, Les Paul got stolen, but it again came back miraculously in the hands of Cosmo Verrico who was also the guitarist of Heavy Metal Kids. And back in 2003 Les Paul was sold at an auction for $1 million.

this guitar gained its value as it was played by the world-class guitarists such as Slash, Kirk Hammett, and Rick Neilson, all of these three guitarists have played Korina at some point of time during their careers. And as of now only ten of these Korina have been made and by now you can clearly get an idea of how rare it is. Moreover, the rarity and the unusual shape give this guitar its uniqueness. Korina was sold at an auction for $1, 1 million, and it is one of the most expensive guitars ever sold for its uniqueness and rarity.

up next in the list we have, Bob Marley’s Washburn. Bob Marley has been the most famous musician who ever lived on the planet without any doubt, and he owned only seven guitars for his whole lifetime. Among one of the guitars is the Washburn 22-series. Bob Marley gave this guitar as a gift to his Guitar technician, Gray Clausen. According to some of the reports and rumors, it is said that Washburn was sold at the auction for $1.2-$2. But the actual amount is still not known as to what is the actual amount for which the guitar was sold.

this is another one from Jerry Garcia. Just like the tiger, Wolf is known for its distinctive work. This is a custom-made guitar which was built up by Doug Irwin. This guitar made its very first appearance not during any show or concert but at a private party for the Hell’s during 1973. During its manufacturing time, it was designed with a peacock logo, but later on, Jerry decided to replace it with the logo of a wolf, and hence since then it received its name “Garcia’s Wolf”. It was initially sold at the auction as a tiger but again back in 2017, it was again sold at a fundraiser for the Southern Poverty Law Centre, where it was sold at the whopping amount of $2 million

the perfect white touch and finish give a proper uniqueness to this expensive guitar and make it different from the other guitar in the list. This guitar was played by Jimi Hendrix, back in 1969 during the Woodstock Music Festival, and during this time his legendary performance took place, “the Star-Spangled Banner”. Through its unique history, it had earned a huge name in the music industry, and through time it became popular. And thus back in 1998, it was purchased by Paul Allen, the co-founder of Microsoft and he paid $2 million for this expensive element.

the next most expensive guitar that has been in the list, is John Lennon’s Gibson. And it definitely has something very special in it, featuring some of the amazing features within it. This electric guitar was one of a pair which was purchased by John Lennon and George Harrison back in 1962. This iconic guitar has been used to compose some of the most elegant and iconic songs such as “I saw her standing there”, “she loves you” which was composed by Paul McCartney. This guitar had earned a special name after the Beatles performed with it in 1963. It was rumored that this guitar was lost, but several years later it was resurfaced. And back in 2014, during an auction it was sold for $2.41 million dollars. .

“Reach out to Asia” Fender Stratocaster:

at last, we have come to an end with the most expensive guitar in the list, this guitar was created by Bryan Adams for the “reach out to Asia”, a project which was aimed to help the affected victims of the 2004 Indian Earthquake and the tsunami, which resulted into a worse condition in the country. This guitar is unique and is different from the other nine guitars because it has been signed by some of the famous rock stars such as Jimmy Page, Mick Jagger, Eric Clapton, Keith Richards, Brian May, David Gilmour, Jeff Beck, Liam Gallagher, Angus and Malcolm Young, and Brian Adams. A total of 19 artists have signed all over the guitar. This guitar, “Reach out Asia”, uniquely holds a story within it. Back in 2015, it was sold at an auction by Sotheby’s for a whopping amount of $2.7 million. Thus making it the most expensive guitar that has been sold ever in history.

We hope that you have enjoyed the article related to the top 10 most expensive guitars.

Top 20 Most Expensive Alcohol Drinks in the world