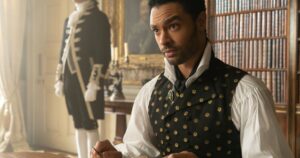 It’s been nearly a year since “Bridgerton” breakout Regé-Jean Page shocked fans with the news that he wouldn’t be returning for the Netflix series’ second season.

“It’s been an absolute pleasure and a privilege to be your Duke,” he wrote in an Instagram post referring to his commitment-wary character Simon Basset, the Duke of Hastings. “Joining this family — not just on screen, but off screen too. Our incredibly creative and generous cast, crew, outstanding fans — it’s all been beyond anything I could have imagined. The love is real and will just keep growing.
”The British actor was integral to the successful reception of the steamy period romance, created by Chris Van Dusen and executive produced by Shonda Rhimes. After its premiere in late 2020, Page picked up Emmy and Screen Actors Guild nominations, and won an NAACP Image Award for his performance. His upcoming projects include Netflix’s Russo brothers thriller “The Gray Man” and Paramount’s “Dungeons & Dragons” movie.
Recmnded Reads:-
So how did the new installment of “Bridgerton,” streaming March 25, manage to write out its lead character? Quite easily, actually. Each of the eight Julia Quinn books on which the series is based, is centered on a different Bridgerton sibling as they navigate the “season” to find a match for marriage. The Netflix show follows suit: Page told the press that Simon’s story was always going to follow a self-contained, single-season arc, and was said to be signed to a one-season contract.
Page’s exit is addressed immediately in the second season, which is based on Quinn’s book “The Viscount Who Loved Me.” Just over a minute into the first episode, his wife, Daphne (Phoebe Dynevor), is shown arriving alone at the Bridgerton home, just in time for the presentation of her sister. When everyone is running behind, she scolds her siblings: “You do realize I left my husband and child at home for this?”
Minutes later, he’s again brought up by his best friend Anthony Bridgerton, whose mind is set on finally finding a wife. “Hastings did it after all,” says the Viscount. “How hard can it be?”

As promised via Netflix’s Twitter account last year, Daphne continues to make appearances throughout the season, “helping her brother navigate the upcoming social season and what it has to offer.” She attends family gatherings and societal events, and sometimes brings along her son (introduced as Augie in the third episode and appearing again in the eighth).

At one point, it’s announced that the Duchess won’t be at a big Bridgerton ball because little Augie has a cough. Yet the Duke’s whereabouts are not mentioned or questioned.
Daphne occasionally refers to Simon when speaking of the past, recalling to Anthony how she and the Duke first fell in love. Only once does she talk of their offscreen life together: In the fourth episode, she tells her mother, “Every time I think my marriage has become simple, Simon and I find some new stone to turn over, a new foible that one of us needs the other to tease out and inspect,” she says. “It is decidedly irritating, yet incredibly gratifying at the same time.”
By then, viewers will likely be swept up in more current courtships, the latest orchestral covers of pop songs, the stir caused by new arrival Edwina Sharma (Charithra Chandran) and her older sister Kate (Simone Ashley), and that Season 1 cliffhanger about Lady Whistledown’s identity.
Anyone still craving more of Page should heed Rhimes’ reminder: “The Duke is never gone,” she tweeted. “He’s just waiting to be binge watched all over again.”

Rating: TV-MA (may be unsuitable for children under the age of 17)