A unified opposition in Parliament helped, but the heavy burden of organizing and sustaining the protest in the villages was done by the peasant groups.

There is a break between politics and policy in India. Decision making on almost all issues of governance is different from mobilizing politics and public opinion.

Thus the repeal of agricultural laws is a remarkable example of politics and policy coming together, though in conflict. However, the shocking thing is that politics has come from farmers’ groups and not political parties.

The manner in which the India government passed three bills, tried to intimidate and illegalize protests and then repealed the laws, shows that the government attempted to build consensus not only in favor of the bills, but also in response to the channel grounds themselves were not working properly.

The opposition was supporting the protest, but with a few notable local exceptions, it had little role in actually mobilizing grassroots public opinion. A unified opposition in Parliament helped, but the heavy burden of organizing and sustaining the protest in the India villages was done by the peasant groups. 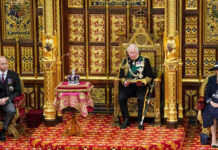 ‘I Feel So Lost’: the Elderly in Ukraine, Left Behind, Mourn